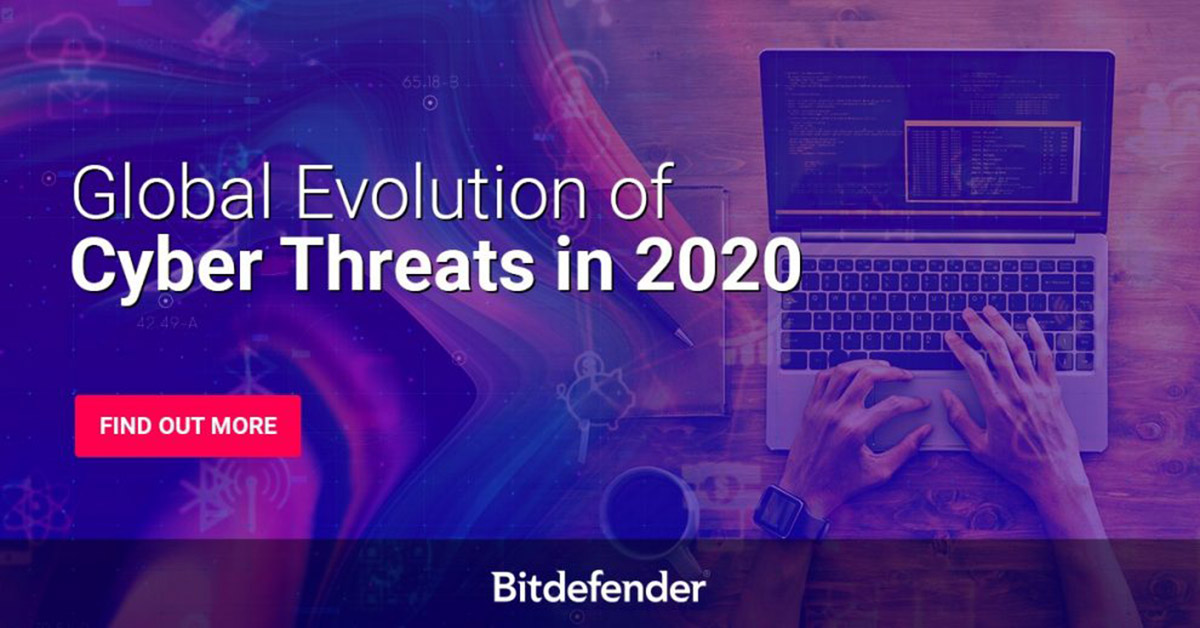 Cybersecurity can often seem like a topic for the business sector. But regular consumers are equally affected by cybercrime, directly or indirectly. Bitdefender this week has published its annual Consumer Threat Landscape Report for 2020 underscoring some of the most prevalent cyber threats targeting regular users today. A key stat: cybercrime in 2020 was marked by a visible and aggressive targeting of the human layer.

Aligned efforts to capitalize on COVID-19

The COVID-19 pandemic provided lucrative ground for every ‘school’ of cybercrime, especially in the first half of the year. Stepping into the second half, however, bad actors were visibly honing their skills to go after bigger targets with increased rates of success.

The start of the pandemic saw cybercriminals switching gears to aggressively target remote workers with COVID-themed scare tactics in a bid to compromise either them or their company. In fact, most threats analyzed by Bitdefender in 2020 were more prevalent in H1 than in H2. While interesting, this shouldn’t come as a surprise.

The switch to remote work meant that home networks now harbored both personal devices and company-issued hardware. Internet-connected smart devices, like surveillance cams, smart light bulbs, smart locks and doorbells and baby monitors, are notoriously fraught with vulnerabilities, posing grave security risks. Devices with proprietary operating systems account for 34% of what consumers own and 96% of all detected vulnerabilities. Bitdefender saw a 338% increase in Smart TV vulnerabilities compared to 2019.

Distinguishing spam from legitimate messages has become more difficult as spammers shift from quantity to quality. While spam messages mostly still delivered the same Trojans or ransomware, cybercriminals in H2 opted for better open rates. In the ransomware department, 2020 saw a 485% year-over-year increase. While the business sector is typically the target for ransomware, consumers who neglect cyber-hygiene are increasingly placing themselves in the attackers’ crosshairs.

With most smartphone owners using an Android device, we noticed an unusual trend where a relatively large number of users started installing Zoom apps from non-official sources. This opened up their devices to malware posing as Zoom installers. Also, 35% of all Android malware detected came from the Android.Trojan.Agent family, followed by Android.Trojan.Downloader at 10% and Android.Trojan.Banker at 7%.

These new changes and trends in the threat landscape will likely spill over into 2021. Cybercriminals will likely reuse everything that proved successful during 2020 and users will also have to adapt to better identify and mitigate threats. Whether it’s IoT devices, ransomware, spam, phishing or Android threats, the 2020 threat landscape showed that cybercrime is quick to adapt and highly opportunistic, and that panic, fear and misinformation can become powerful tools in the hands of threat actors.

Download the full 2020 Consumer Threat Landscape report for an in-depth look at these findings, as well as a breakdown of stats by geography. The report is based on the analysis of quarter-on-quarter and year-on-year data derived from Bitdefender’s Global Protective Network (GPN) that performs billions of queries per day on millions of endpoints and uses advanced algorithms to identify various threats and attack patterns.