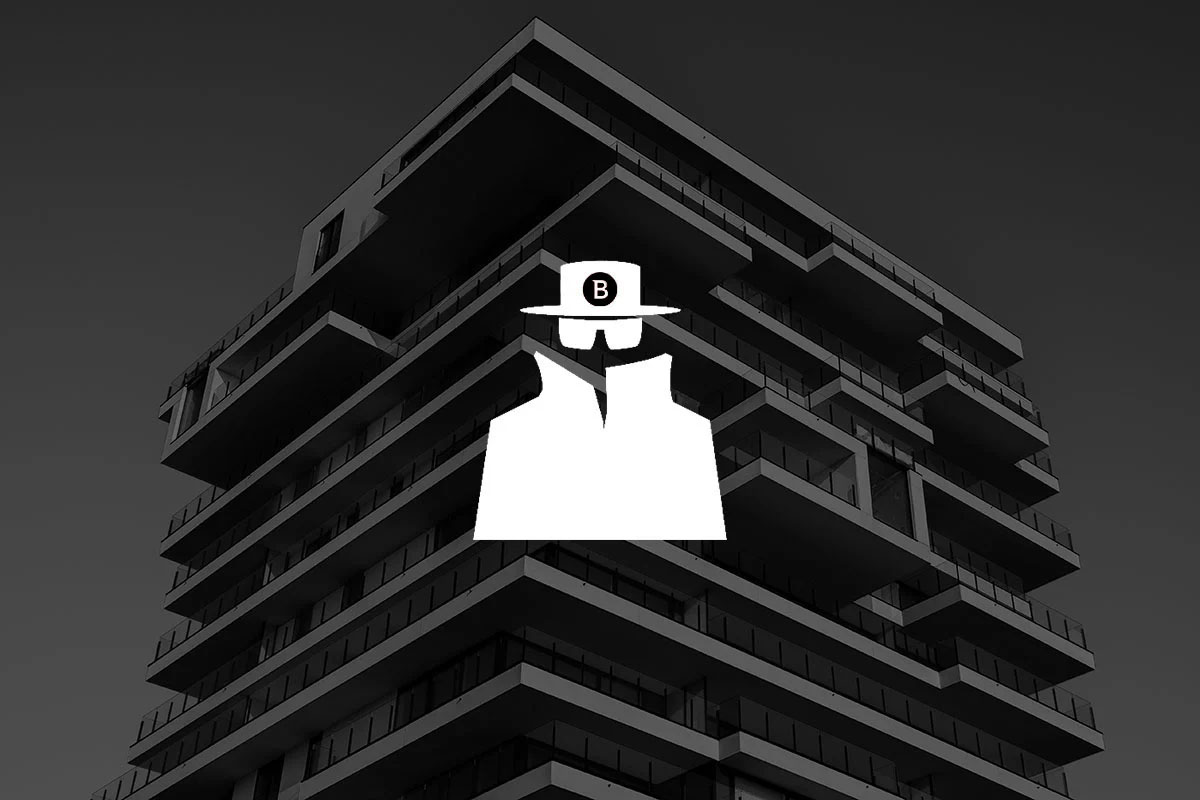 Corporate espionage, also known as industrial espionage, is espionage conducted for commercial or financial purposes. One of the common misconceptions is that espionage is affecting only large corporations or government entities, but it is more common than expected. In this article, we provide an analysis of one such exfiltration and explain why these attacks are on the rise.

In the last few years, we have seen a dramatic shift in the level of sophistication of cyber attacks, mostly thanks to the introduction of the profit-sharing business model for financially motivated threat actors. However, not all stages of the kill chain have received the same attention from threat actors – the focus has been mostly on developing the attack after the initial compromise, focusing on reconnaissance, lateral movement, and extortion methods. The three attack vectors are still dominating the initial compromise:

But one of these things is not like the others. Vulnerability exploits are not relying on the human element, instead, they are using automated scanners to identify and compromise internet-facing systems with unpatched vulnerabilities. According to the latest Data Breach Investigations Report 2022 (DBIR 2022), the number of security breaches caused by vulnerability exploits has doubled in the last year. This trend can be explained by the increased popularity of hybrid attacks – a type of attack where the initial compromise is opportunistic and relies on automated scanners but is then triaged by a human operator to determine if it’s worth further development.

Hybrid attacks are on the rise, combining the automated initial compromise with hands-on triage.

Data exfiltration and the threat of industrial espionage

This “upscaling” of attacks can take different forms – for example, even a small company with few computers can have highly valuable data, for instance, lawyers working with celebrities or politicians. Or a company can be part of the supply chain for a much larger corporation, becoming a prime target for Ransomware-as-a-Service groups. Understanding how modern threat actors operate, it should not be surprising that business partners were involved in 39% of the data breaches last year (source: DBIR 2022). We expect this trend to continue, as threat actors are focusing more on a breach of confidentiality (data exfiltration) than a breach of availability (deploying ransomware). While we are still using the label “Ransomware-as-a-Service” for these profit-sharing criminal organizations, many of them are not even deploying ransomware anymore (for example Karakurt). With the rise of hybrid attacks, even small companies are targeted by sophisticated threat actors, such as RaaS affiliates specialized in enterprise targets, or state-sponsored APT groups.

In this deep dive, we analyze the recent industrial espionage operation targeting a small (under 200 employees) technology company based in the United States. The attack was focused on information exfiltration and spans several months. A vast network of several hundred IP addresses (most of them originated from China) was used as part of this attack. Small and medium-sized companies often lack detection and response capabilities, the most effective defense mechanism when dealing with sophisticated threat actors. We share this research to help other companies to identify their blind spots and become more cyber resilient.

Anatomy of an attack

Our security researchers from Bitdefender Labs have released a research paper Hiding in the Shadows: Investigation of a Corporate Espionage Attack with full details. The anatomy of an attack that follows is the summary of this research.

The initial infection vector was an internet-facing instance of ZOHO ManageEngine ADSelfService Plus web server exploited via a known unpatched vulnerability CVE-2021-40539. This is one of the top 15 routinely exploited vulnerabilities (source: CISA), allowing a threat actor to bypass a security authentication and execute arbitrary code.

Surprisingly, attacking basic web applications using one of the well-known vulnerabilities is an effective method for nation-state actors to compromise networks. This is a low-cost/high-value attack vector, and over 30% of web application attacks are related to espionage (a significantly higher number than any other attack vector). When prioritizing your security strategy, make sure these routinely exploited vulnerabilities are handled as a top priority. You can read more details about this vulnerability in the research How to exploit CVE-2021-40539 on ManageEngine ADSelfService Plus.

After gaining access to this system, threat actors deployed a web shell in a directory accessible from the internet. A web shell is a malicious shell-like interface (usually written in web development languages such as JSP, PHP…) that is used to access a web server remotely, providing a threat actor with access even after the exploited vulnerability is fixed. For this operation, a combination of different web shells was used – Tunna, ReGeorg, and China Chopper Webshell.

After the initial foothold was established, threat actors continued with system discovery, identifying and locating other machines and file shares on the network. Microsoft Exchange server was compromised, and another set of web shells was deployed on this server. Threat actors abandoned the initial compromised server in favor of this Exchange server, which became their base of operations. 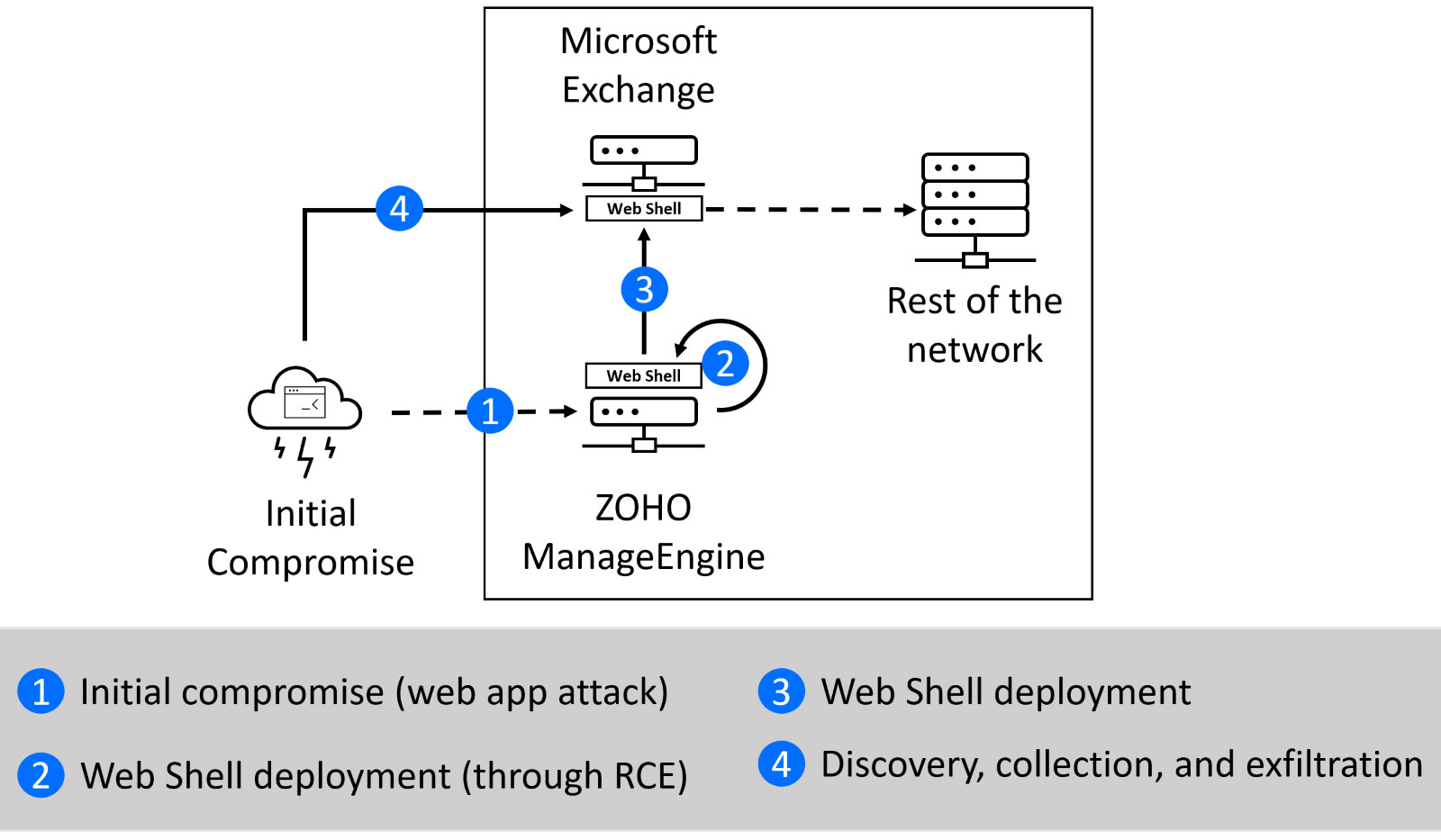 Preparing staging environment for the exfiltration

Once a backup access vector was set in place, an extensive discovery phase was started. Threat actors used a range of tools to obtain access to credentials, including a signed version of DCSync module of Mimikatz, Windows Vault Password Decryptor, Sqldumper.exe utility, NTDSDumpEx, and export of SAM registry hives. To capture more credentials, threat actors enabled the Digest Authentication protocol (WDigest) in the registry. This was a legacy protocol used in Windows Server 2003 and older operating systems that requires storing clear-text passwords in the memory. By enabling this protocol, threat actors can harvest not only password hashes, but also clear text passwords for all users authenticated against a server with this protocol enabled.

Sensitive information was collected, including SSH keys, VPN certificates, and more. The threat actor managed to obtain plaintext credentials of a user with read access to multiple Git repositories, and the source code was downloaded using a tool called git2.exe. To exfiltrate all this collected data, threat actors used rar.exe utility to split files into a collection of 2GB archives. Both data and headers were encrypted for these archive files and protected by the password [email protected]@FBI (very subtle). Before exfiltration, all files were renamed from .rar to .jpg and stored in a folder accessible from the internet.

To collect all this data, a few different methods were used, depending on the type of target machine. For file shares, WinRAR was used to compress files and pull archives to the central exfiltration folder (pulling data). For Windows OS machines, WMI was used to start the remote WinRAR process (pushing data from the target machine). Finally, for Linux OS machines, a different approach was used – Rclone tool uploaded files directly to the Amazon S3 bucket.

After all the files were saved in the central exfiltration folder, exfiltration was launched using normal HTTP GET requests (the folder was accessible from the internet). These HTTP requests were performed in a highly parallel manner – threat actors used HTTP Range Header, so multiple IPs can concurrently download different segments of a single file. Over 650 IPs were used to exfiltrate this data, most of them can be traced back to China.

The best protection against modern cyber-attacks is a defense-in-depth architecture. Start with reducing your attack surface, focusing on patch management (not only for Windows but for all applications and internet-exposed services), and detection of misconfigurations. Read our technical brief to learn about GravityZone Patch Management solution.

The next security layer should be reliable world-class prevention controls that can eliminate most security incidents, using multiple layers of security, including IP/URL reputation for all endpoints, and protection against fileless attacks.

Implementing IP, domain, and URL reputation, powered by Bitdefender’s threat intelligence solution, is one of the most effective methods to stop automated vulnerability exploits. According to analysis in the Data Breach Investigations Report 2022, only 0.4% of the IPs that attempted RCEs were not seen in one of the previous attacks. Block bad IPs, domains, or URLs on all devices, including endpoints, and prevent a security breach in your business environment.

Finally, for the few incidents that get through your defenses, lean on security operations, either in-house or through a managed service, and leverage strong detection and response tools. Modern threat actors often spend weeks or months doing active reconnaissance on networks, generating alerts, and relying on the absence of detection and response capabilities.