The ongoing phishing campaign began on April 19, targeting QuickBooks users from across the globe. Overall, 14% of the malicious emails reached the United States, 11% in South Korea, Germany, and India, 7% in the UK and France, 4% in Italy, 3% in Sweden, and 2% in Canada, Belgium, Austria, Switzerland and the Netherlands.

More than half of the spoofed emails originate from IP addresses in Italy. The perps have forged the header (‘[email protected]’), making it seem like the messages are genuine. To avoid multiple detection tools, threat actors play with the subject lines and sender names.

Attackers also tailored the emails’ body in an attempt to sneak past anti-phishing and anti-spam mechanisms. Here are some examples:

The emails contain a seemingly harmless Microsoft Excel Spreadsheet attachment carrying a hidden threat. A malicious macro within the .xls file will launch a Trojan dropper infecting the victim’s machine with Dridex. 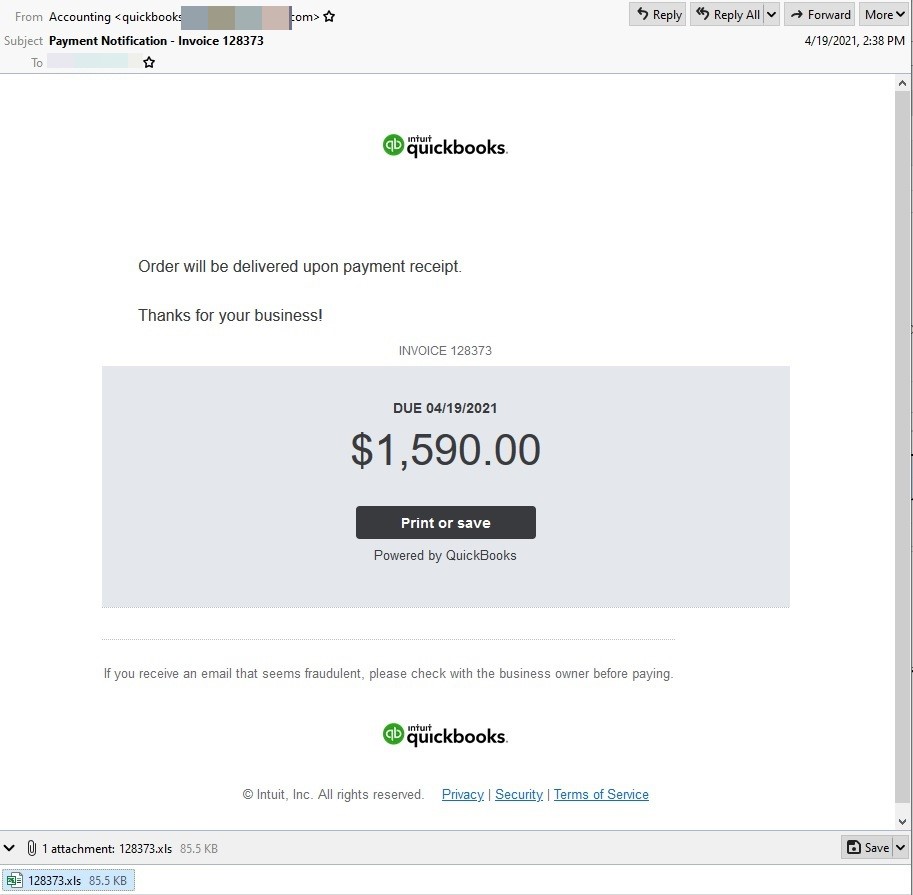 This malicious software steals confidential information from victims, including banking credentials that threat actors can use to access bank accounts and make fraudulent transactions.

Although the primary objective of this banking Trojan is to steal banking info from victims, cybercriminals have meticulously updated the malicious software over the past decade. Since 2020, Dridex has also been used to deliver ransomware to targets and maximize earnings.

Cybercriminals have often disguised their malicious phishing campaigns by using the names of legitimate and well-known companies to ensure maximum efficiency. Emails mimicking a regular QuickBooks invoice that small businesses or organizations usually receive can have severe consequences.

Careless users can end up having fraudulent charges on credit cards, unusual wire transfers from company accounts, and even data breaches that can compromise the entire network and customer base of an organization.

This developing malicious campaign, taking advantage of the popularity of the US-based accounting tool used by over 2 million small businesses worldwide, is not new. QuickBooks-themed malware campaigns usually spike during tax season in the hopes that they catch users off guard. However, for the United States, it comes short of a month away from the tax season deadline.