The cryptocurrency Litecoin soared in value earlier this week upon the news that supermarket giant Walmart would accept it as a form of payment at its retail stores across America.

The only problem was… it simply wasn’t true.

Despite appearances, Walmart had not issued a press release announcing its support of Litecoin.

Instead, a bogus press release – claiming to be an official communication from the retail goliath – had been posted in Walmart’s name on GlobeNewswire, one of the world’s largest press release distribution networks. 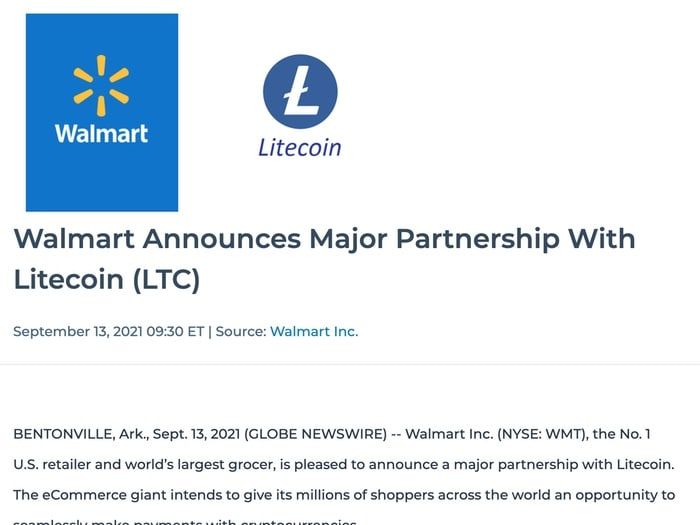 GlobeNewswire pushes out press releases for thousands of companies around the world, directly into the hands of reporters.

So it was no surprise to hear that the likes of Reuters and CNBC took the press release at face value, and reported the partnership between Walmart and Litecoin as fact.

Indeed, even Litecoin’s own social media team were clearly duped by the news – retweeting the announcement themselves, and thereby giving the fake story even more credence. 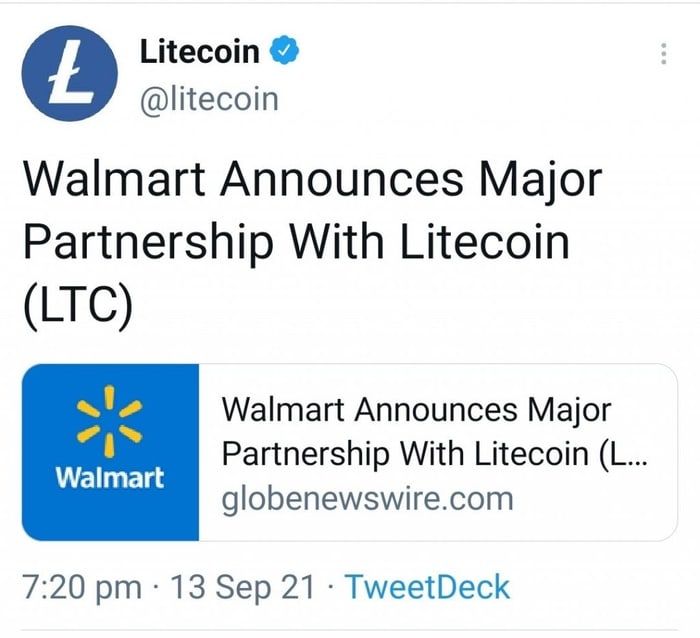 Bearing that in mind, it’s perhaps not that surprising that many believed that the news might be true and responded by buying Litecoin, causing the value of each Litecoin token to rise from £125 to £170.

It was only when CNBC sought additional comment from Walmart’s public relations team that they realised the story was untrue. Corrections were rapidly made by media outlets, and Litecoin confirmed that news of a partnership was false.

Well, we know that a false press release was posted on the real GlobeNewswire website, and that the press agency subsequently deleted it, and published an advisory telling journalists and readers to disregard the news.

But that doesn’t put GlobeNewswire in the clear, because clearly the false press release should never have been published on its website in the first place.

It appears that a hacker created a fraudulent account on GlobeNewswire and successfully published a press release in Walmart’s name. GlobeNewswire didn’t realise at the time that anything suspicious was occurring.

The company says that it has introduced new security measures to prevent similar bogus press releases from being posted in future:

“When GlobeNewswire became aware this morning that a fraudulent user account was used to issue an illegitimate press release we promptly withdrew the press release and issued a Notice to Disregard. This has never happened before and we have already put in place enhanced authentication steps to prevent this isolated incident from occurring in the future. We will work with the appropriate authorities to request – and facilitate – a full investigation, including into any criminal activity associated with this matter.”

And why did a hacker go to such lengths to post a false press release? Well, the answer to that is simple – money.

It seems certain that the release of the bogus press release was an attempt to fraudulently manipulate the price of Litecoin – giving the hacker an opportunity to sell their Litecoin investment at a healthy profit. In short, it was most likely a “pump and dump” scheme.

And all this, of course, has been inconvenient and a nuisance for the innocent parties of Walmart and Litecoin, but will have hurt most of all those investors who saw a soaring cryptocurrency and bought into the hype, not realising that it was based on a lie.