The world’s largest electronics manufacturer, Foxconn, has suffered a cyber attack and extortionists are reportedly demanding a $34 million ransom be paid for the recovery of its data.

As Bleeping Computer reports, a Foxconn’s facility located in Ciudad Juárez, Mexico, was hit over the US Thanksgiving holiday period by hackers who stole data from the company’s servers before encrypting systems.

The DoppelPaymer gang has claimed responsibility for the ransomware attack, and begun to publish stolen data on a website it created earlier this year to coerce companies into paying huge ransom demands. Foxconn, like other victims before it, will have been told by the criminals that it risks facing difficult questions by partners, customers, and the press if sensitive data is shared online. 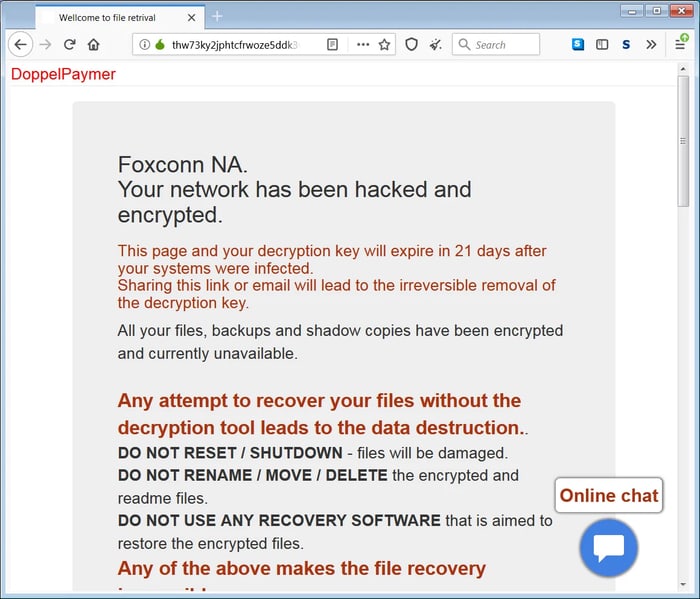 According to Bleeping Computer the hackers claim to have encrypted over 1000 servers at Foxconn North America, and stolen 100 GB worth of data. To rub salt into the wound, the criminals are also said to have deleted 76 terabytes of backups.

The rest of the Foxconn company, which employs over 800,000 people and counts the likes of Apple, Dell, Amazon, Nintendo, Microsoft, and Sony amongst its many high-profile past and present customers, is not believed to be affected by the ransomware.

The criminals clearly feel that they’ve hit the jackpot though, demanding a cryptocurrency ransom of over 1800 Bitcoins (approximately US $34 million at current exchange rates).

Foxconn has made no public statement about the attack, and it is unclear whether they are prepared to negotiate with the cybercriminals or not. For now it would seem they would rather the incident remain private.

What is very public, however, is that the official website of Foxconn’s facility in Ciudad Juárez is currently displaying an error message:

Whether the website downtime is a direct result of the ransomware infection, or has been intentionally taken offline alongside other systems by Foxconn’s IT team is unclear.

Past victims of the DoppelPaymer ransomware include the city of Florence in Northern Alabama, the city of Torrance in the Los Angeles metropolitan area, Newcastle University, and the horrific ransomware arrack that resulted in a hospital patient dying in Germany.