The phone numbers, email and postal addresses of over 270,000 owners of the Ledger cryptocurrency hardware wallet have been made freely available for download from a hacking forum.

The information, which is accompanied by the email addresses of over one million people who have subscribed to the Ledger newsletter, is believed to have originally fallen into the hands of criminals following a security breach at the firm back in June 2020.

Initially made available for sale through underground hacking forums populated by cybercriminals, the data is now available at no cost.

And that, inevitably, means that more and more malicious parties may attempt to exploit the information in an attempt to defraud the unwary and intimidate Ledger customers.

Such attacks are already occurring on a regular basis.

Earlier this month, for instance, Bleeping Computer reported that Ledger customers have been receiving breach notification emails saying that users need to install a new version of the Ledger Live software and reset their PIN.

However, despite appearances, the emails did not really come from Ledger but were instead sent by cybercriminals to direct unsuspecting users to a fake version of Ledger Live for Windows which would steal wallet users’ recovery phrase and secret passphrase (if they have enabled that extra layer of security). 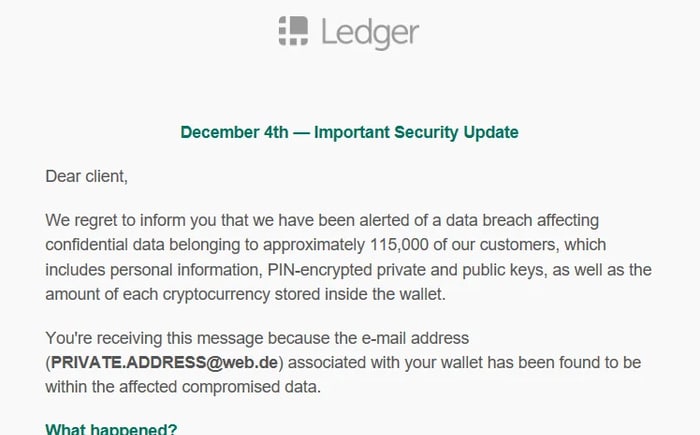 With such information, an attacker could gain full access to a users’ cryptocurrency funds.

And just today, Ledger warned customers about another scam which has seen attackers demand a $500 ransom not to invade recipients’ homes, using information presumably leaked from the company’s servers.

At the time of writing, Ledger says it has shut down 171 phishing sites in the last two months. With the data related to Ledger’s customer base being so freely available, the number of phishing sites targeting users is only going to rise.

Ledger is asking customers who receive fake communications pretending to be from the company to report it to them.