Blackmailers are having a field day capitalizing on victims of the Ledger data leak from July 2020. Nearly a year after cybercriminals gained access to the e-commerce database of the France-based crypto wallet company, a new extortion campaign threatens users’ financial and emotional well-being.

This novel attempt at extorting victims, spotted by Bitdefender Antispam Lab , differs sharply from the usual method of operation of the perps. Unlike previous blackmail attempts triggered by the data leak, malicious actors no longer include physical and home invasion threats in their messages. Our telemetry shows a dispersal of tens of thousands of emails. 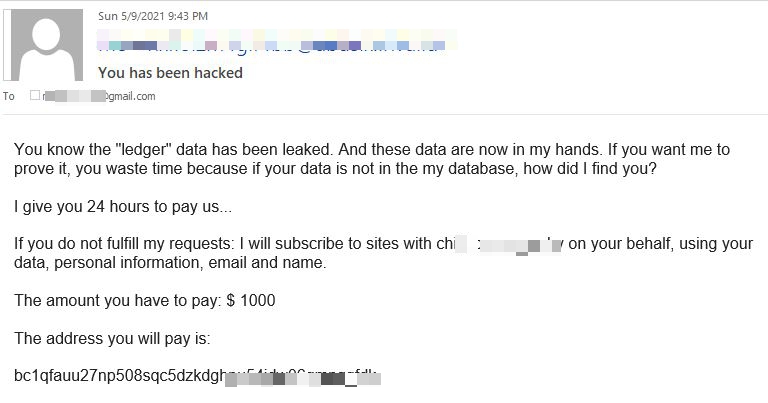 The subject line conveniently reads, “You has been hacked,” to draw recipients’ attention. Despite the obvious poor grammar, this line may guarantee that targets will not dismiss the message.

The threat actor starts by notifying the recipient of the reason for the unsolicited email.

“You know the ’ledger‘ data has been leaked,” the message reads. “And these data are now in my hands.”

The extortionist is referring to the 2020 hack and data dump that followed. After the Ledger database was compromised, names, email addresses, home addresses, and telephone numbers of 272,000 customers were dumped on Raidforums, a database sharing and marketplace forum.

Check if your personal information has been stolen or made public on the internet with Bitdefender’s Digital Identity Protection tool; only with your e-mail address and phone number.

“If you want me to prove it, you waste time because if your data is not in the my database, how did I find you?,” he continues. The efforts to convince targets of the source and motive behind the correspondence end here. “I give you 24 hours to pay us…”

Suppose you refuse demands to pay him $1,000. In that case, the perp will subscribe to websites containing sexually explicit materials with minors using the personally identifiable information from the data leak, including your email address and name.

In the Russian version, the extortionist gives targets more insight and details, allowing them a 24-hour window to “translate” and transfer the funds. Presumably, this increase in effort will pay off eventually.

“Ledger was hacked some time ago,” the translated version reads. “You, of course, know about this, at least you have heard about it. After the Ledger data leaked, I got your information (email address, password, first name, last name, and more). I currently have access to all of your data. I can sell this data on the dark web or use it for other purposes.” 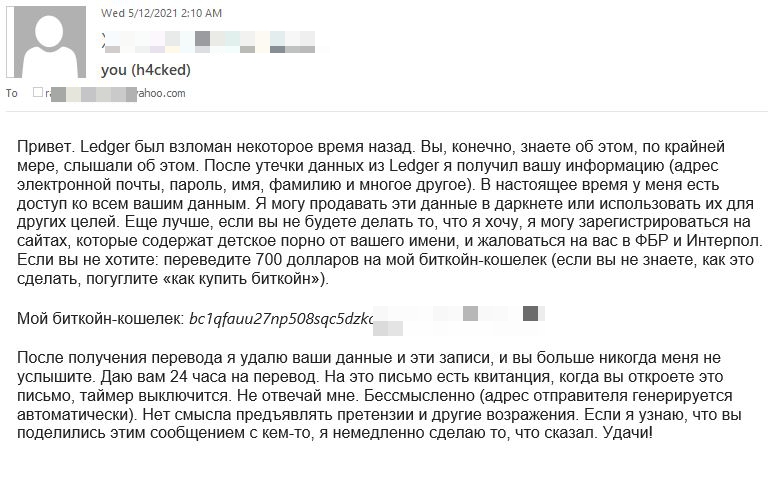 The narrative used by the threat actors employs the same intimidation methods, with a twist. Not only will he register to the same websites, but after doing so, he will report you to the FBI and Interpol.

“Better yet, if you don’t do what I want, I can register with sites that contain child [redacted] on your behalf and report you to the FBI and Interpol,” he adds.

The end of the email lists what victims should and should not do. Targets must transfer $700 within 24 hours. After the transfer is complete, the threat actor says he will delete the data and recordings, and you will never hear from him again.

“I give you 24 hours to translate. There is a receipt for this letter, when you open this letter, the timer will turn off. Don’t answer me. Pointless (the sender’s address is generated automatically),” he explains. “There is no point in making claims and other objections. If I find out that you have shared this message with someone, I will immediately do what I said. Good luck!”

For the moment, the two crypto wallets have received no transfers. In contrast to run-of-the-mill extortion attempts, this attack could prove more efficient in the long run. Traditional sextortion scams are indeed popular, but users are also becoming familiar with the ruse, especially after a year of social distancing and the use of video-conference tools.

In this particular case, the malicious actors leverage an authentic security incident publicly acknowledged by the company. Of course, if this attempt at extorting thousands of dollars from victims fails, there’s no telling what cybercriminals will come up with next.

Note: This article is based on technical information provided courtesy of Bitdefender Antispam Lab.