A long time ago, phones were just phones and little else. While modern devices retain this particular function, modern descendants are anything but talking devices.

They have become gatekeepers to our digital lives. But with such power comes the responsibility of protecting our precious data, especially since criminals know its value. Unfortunately, there’s no shortage of risks people face every day when using a mobile device and, in most cases, gaining access to the device and data on it is the criminals’ ultimate goal.

Smartphones and tablets have become extensions of their owners. People use them daily, no longer thinking about security or the value of the data they hold. Just to set up a smart device, people have to share valuable information with the makers of the device, and this sharing of information continues with every new subscription to an online service or a newly installed app.

One of the most significant security problems in the modern world is the lack of users’ awareness of their data’s value. As long as people don’t recognize the wealth hidden away in their devices, attackers will continue trying to steal it.

There are three major ways Android users can become victims:

Knowing about dangers ahead of time is an essential first step to a secure digital life.

Surely, just browsing the internet shouldn’t be such a big problem, but danger lurks everywhere. Sometimes it’s difficult to see where the risks lie, and future victims find out too late about what they should and should not do when surfing the internet.

There’s a grey area of web design that allows websites to take advantage of some confusing elements. For example, most people know about the pop-up asking users to accept cookies, but some websites present similar pop-ups for newsletters or even app installs, which on mobile devices can be a problem because of a smaller screen or because the pop-up mimics operating system prompts.

Other pop-ups might ask for the email address, promising some type of winnings, or worse, sending people to phishing websites under the guise of a chance at a prize. In other situations, some websites present fake buttons or multiple identical buttons, which usually directs users to load ads. The buttons are so similar that it’s challenging to determine which is the right one. “Download” buttons are a favorite of sketchy websites promising downloadable content.

Unwanted messages arrive in all forms, whether it’s through email, SMS or instant messages. They might be relatively innocuous, carrying promotions for various products, or more insidious, trying to persuade people to download malware or access phishing websites.

No matter the source, smartphone users are bombarded every day with attempts that fall into one of these categories. Criminals use any attack vector to push their malicious content onto users, and some campaigns are more prominent than others.

Take the recent Flubot campaign that took over most of the world. Android users received SMS messages, reportedly from various shipping companies, with messages about lost parcels, extra fees, and so on. Victims were tricked into installing malware on their Android devices, which criminals had designed to steal the contact list, monitor for banking app activity, steal passwords, and even allow attackers to control the device remotely. 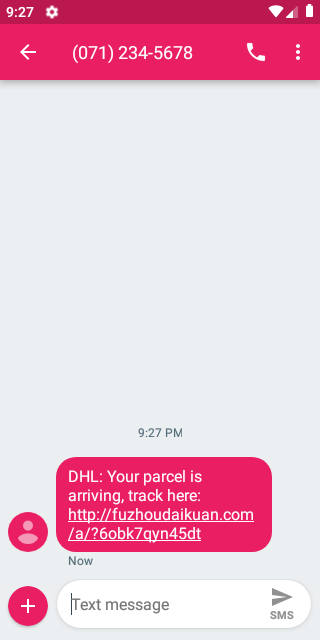 The malware campaign evolved organically, with compromised Android devices sending SMS messages to stolen contacts. As a result, attackers didn’t need other services to send messages for them as victims acted as infection vectors.

No matter the source, spam messages represent a notable problem on mobile devices. Therefore, security solutions and informed users are the most critical prevention measures.

One of Android’s strengths is its ability to load apps from outside the official store. Of course, there are multiple legitimate reasons to do that, but this critical feature adds a big security problem.

One of the ways criminals trick people into installing malware is through this particular Android feature. Unfortunately, permanently disabling the feature is not an option, so the best course of action would be for users to avoid installing apps from outside the official store unless they really know what they are doing.

The Flubot campaign relied heavily on this attack vector, and it’s not the only campaign to use sideloading as its primary infection method.

One solution to rule them all

Some of these problems could be avoided only by informed users, but even this is difficult because they would have to always be up to speed with recent malware and spam campaigns and be aware of the changes in the cybersecurity world.

A better way to deal with security is to install a comprehensive solution like Bitdefender Mobile Security, which can turn the everyday experience of an Android user into a safe one.

In all of these common scenarios, the security solution acts as a buffer between the users and the dangers lurking online. So why worry about what might happen when you’re just a few clicks away from a much safer Android experience?